With everyone doing their best to stay safe and inside, it can be tough to get everyone together and keep those games running. There are a myriad of websites and programs that can act as virtual tabletops, and many people these days are turning to programs like Discord for staying in touch with their friends. Unfortunately, this is really the first time a lot of people have had to turn to the internet for gaming, and if you’re not good with computers this can feel like an almost insurmountable barrier.

Thankfully, I’ve put together this handy little guide that can help with making the transition a bit easier. I’ve been running online games for more than 6 years and at this point, my primary group has settled on one particular setup using a program for Discord called Savage Bot.

Setting Things Up
First, you need to set up a Discord server. This process is pretty simple and is the same in both the desktop version and the downloaded client. If you're not confident in setting this stuff up on your own, though, feel free to join the Unofficial Savage Worlds Discord! We've got plenty of people willing to help, and we have Savage Bot installed already so you can give it a spin, or even run a game in one of our Game Rooms. 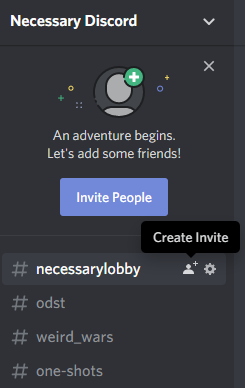 That's all! I won't give you a complete walkthrough of Discord as a program, but take a look at this video if you want more details on how to get the most out of the program.

Once you have a server, then you need to invite Savage Bot to come and join in! Click this link and it will take you to the Discord website and will ask you to choose which server you would like to add it to. Select the server you just made, hit Authorize, and Savage Bot will pop up in your server!

Don't worry, Savage Bot won't do anything until you issue him a command; we'll get into those next!

Using Savage Bot
Now that you have everything you need, you’re pretty much ready to go! Here’s a quick overview of how to make use of Savage Bot in your games.

Rolling Dice
First thing’s first: how do you get the dice rolling? Savage Bot was constructed from the ground up for use in Savage Worlds games, so most of the time you’ll only make use of a couple of simple commands, but the full list of commands is available at Savage Bot’s GitHub page. All commands for Savage Bot begin with an exclamation mark (!) and are typed into a chat channel just like you're messaging your buddies.

To make a Trait (attribute or skill) roll for a Wild Card—that’s pretty much any player character—simply type !sX, where X is the die type. This will roll the skill die, a d6 Wild Die, calculate any Aces, and give you the highest total. If you have a Healing d6 and wish to make a Healing roll, for example, you would just type !s6.

For rolls with multiple skill dice, such as firing a weapon with a high Rate of Fire, add the number of dice before the “s”—firing a RoF 3 machine gun with Shooting d8 would be !3s8, for example. If there are modifiers on your roll, just type it in after the die type (e.g. !3s8-2)

Rolling for Extras and making a damage roll both use the same command. Type in !dX!, where X is the die type. The second exclamation mark is very important, as it tells Savage Bot that these dice are open-ended and can Ace. If rolling for a d6 Extra, for example, you would type !d6!. This can be added together and augmented to handle damage as well—a 2d6+1 pistol would type in !2d6!+1, and a Strength d8 warrior Wild Attacking with his short sword would type !d8!+d6!+2.

Finally, here’s a little trick: Savage Bot will perform the same command multiple times if, right after the command !, you type in “Yx”, where Y is the number of times you want it to roll again. For example, a Charismatic character with d8 Persuasion will always roll Persuasion twice, so you can speed that roll up by typing in !2xs8. As another example, if a character with a machine gun (2d8 damage) lands three hits, you can type in !2x2d8! and the damage for both hits will be rolled at the same time.

I know that some people get a little turned around about when they should use “s” or “d” before their rolls, so here’s how I remember it:
Initiative Tracker
Now, rolling dice may not be as important to you—a lot of groups allow their players to roll their own physical dice and just trust each other to be honest about the results. Even if that’s the case, the other big benefit of using Savage Bot is the robust initiative tracker.

To begin a new fight, type !f. This shuffles the deck and resets the initiative tracker.

To deal initiative to new characters, type in !di [characterName]; you can add multiple characters at a time simply by typing their names. If a new character joins the fight, you can use the !di command at any time to add them to the Initiative Tracker, or the !drop command to remove an unwanted character.

Many characters in Savage Worlds have Edges like Level Headed that change how they draw cards. You can add this directly to a character—after the character’s name, type a space and add -l [Level Headed], -i [Improved Level Headed], -q [Quick], and/or -h [Hesitant]. If a character has both Quick and Level Headed, you can type in -ql to give her both.

If a character wants to spend a Benny for a new card, or has an Edge like Tactician that gives them extra cards, type !card [characterName] to provide that character another card!

At any point, you can type !init into the chat to refresh the initiative tracker, or display it again if it's getting buried under all the dice you're rolling!

This may seem like a lot, but don’t worry—you don’t have to do this every round! Once everyone’s taken their turns simply type !rd + to start the next round, shuffle the deck if a Joker was drawn, and deal everyone their initiative! If any characters or groups have been knocked out of the fight, you can type !rd + -[characterName] to remove the fallen foes automatically!

States
The initiative tracker can even be used to track a character’s “state,” making it easy to handle if a character is Shaken, Distracted, Entangled, and so forth. Use the command !st [characterName] [status]; the available status options are: Shaken (sha), Stunned (stn), Entangled (ent), Bound (bnd), Distracted (dis), and Vulnerable (vul).

Other Tools
This is all you really need to run a Savage Worlds game using Discord. However, some GMs like to go a little above and beyond: here are some additional recommended tools.

The short of it is that I love Savage Worlds and putting things into the game! I've been using the system for upwards of four years now and I'll be posting my findings for all to see!
Feel free to suggest a character from anything (except anime) or submit a character if you have one for consideration! More material to work with is always good.
A plug for those that still think that all Savage Worlds characters are the same. An additional plug for Zadmar's Savage Stuff, which is filled to the brim with clever house rules, programs, and insights on the system.
I also write the Savage MCU and Savage DCEU blogs; sister blogs to this compendium.
First time here? Take a look at this to understand what we do!

“This game references the Savage Worlds game system, available from Pinnacle Entertainment Group at www.peginc.com. Savage Worlds and all associated logos and trademarks are copyrights of Pinnacle Entertainment Group. Used with permission. Pinnacle makes no representation or warranty as to the quality, viability, or suitability for purpose of this product.”